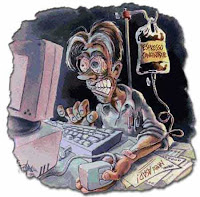 For about four weeks now things have been pretty bleak. Work has kind of overwhelmed me, while at the same time other aspects of my life have been down as well.  Why does it all seem to pile on at once?

The sad part is it's not just me. Almost everyone I know is going through a similar rough patch, one thing after another causing them issues.

What is behind this seemingly endless onslaught? Who knows, maybe it's just the spiraling of the water as it goes down the drain headed for the 2012 apocalypse.  Time will tell.
at May 12, 2010

Back around 1993 or so I used to play a game called Trade Wars 2002 when dialing into the local BBS. I knew a few people that were playing, and I was pretty terrible at the game, but it was a lot of fun.

Basically you start out with a ship, in a sector you call home that comes complete with your own starting planet. Your ship has a few cargo holds on it and a small number of fighters to keep you safe.

Each day you were allotted a number of turns that you could use. Actions in the game would consume these turns, each action taking a variable number of turns based on the speed of your ship.  This was how different people calling into the BBS at different times could compete with one another.  Staying on all day did not give you any advantage, since you would just run out of turns.

Your ship and planet were within your home sector when you started, one of many sectors in the galaxy that made up the game world.  The galaxy size depended on how the operator set it up, anywhere from 1,000 to 20,000 sectors.  This was pretty much dictated by the number of players you expected to be in the game.  Too little and everyone runs into each other, too large and the place is desolate.

For whatever reason I have an itch to play again, so I have setup a Trade Wars 2002 server for my friends and I to play on. The ANSI graphics are as terrible as they ever were, and the game is still fun. :)