The group has been in moderate discussions about our return trip to Las Vegas for 2010.  We had a blast last year for our Flown the Coop trip for 2009, so this year it's Time to Recoop.

Ideas and suggestions about things to do while we are there?  The only certainties so far I would say are a few awesome drinks from Fat Tuesday's, a stop at Batista's Italian Restaurant for dinner one night, and a brunch at Kahunaville. :)

I'll try to keep ideas posted as we further plan out the trip, but of course there will likely be a few details kept under wraps to make sure there are some surprises in store for our group. :)
at March 11, 2010

kegerator in the hizzy 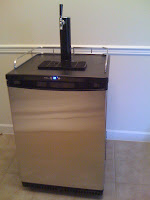 Well i found a deal that I couldn't pass on, so I am now the proud owner of  Kegerator. I'm picking up the CO2 and my first keg today, so should be pouring my first pint tomorrow after it's been in there chilling for 24 hours. I'm really looking forward to it. :)

I'm still not sure where exactly to put the Kegerator in my house, right now it's just against the unused wall in my kitchen area.  In all likelihood it might just remain there, but I don't know for sure yet.  We'll see how it goes.  I supposed it would be a better fit in the entertainment/bonus room upstairs, but honestly I rarely go up there.  I should put some work into that room and get a TV and surround sound setup in there and everything, since I did go in and pre-wire the sound as the house was being built.  You would think that would have been the plan all along, huh? ;)

What kind of TV should I put up there with it I wonder?  One of my existing TVs?  Get a new one?  I don't really have the money (nor the need?) for yet another TV, but perhaps I could move something up there.  I would have to rewire the Satellite but that isn't a big deal, and I already have the network drops up there so support the Netflix box and/or Xbox to put up there.

Then comes the question of seating of course.. I don't really have any seating up there right now, and I would want some seating to accommodate Titans games and UFC events.  Hmmm... Anyone got a couple spare couches? :) :)
at March 02, 2010