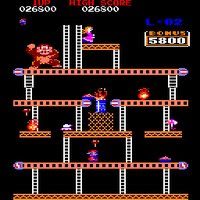 An update was released for my [arcade] on Friday. They added a game called Pooyan, and a modification/hack someone made of Donkey Kong, "Donkey Kong Foundry".

The mod adds a new board called the foundry. Seems to have made a few other level tweaks as well to other boards, adding some difficulty to things. Quite an enjoyable addition to the arcade.

This is probably the best add-on game available since I originally got the arcade and loaded the initial list. Hats off to the author of the mod.
at March 19, 2006