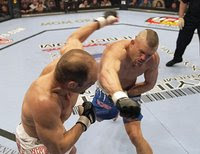 Tonight, in about 16 minutes actually, [UFC 57] gets under way, with the headline bout being ["The Iceman" Chuck Liddell] going up against ["The Natural" Randy Couture] in a tie breaker matchup for the [UFC Light Heavyweight Championship].

This one should be one of the greatest UFC battles we've seen in a really long time, so any real [MMA] fans out there take notice. You won't want to miss this one! I don't really see too many of the undercard matches that I'm all that interested in, other than the return of [Frank Mir].

Although I'm a huge fan of Chuck Liddell, I did place a bet on Couture. The first match they had, Couture absolutely dominated Chuck. The second matchup Liddell caught him coming in and knocked him out, but I just think that had a lot to do with Randy making a mistake. After this knockout, which could have entirely been a fluke (granted -- it could easily happen again) all the betting lines are in favor of Liddell? Sorry, I'm a huge fan, but I'll take those odds. :)
at February 04, 2006